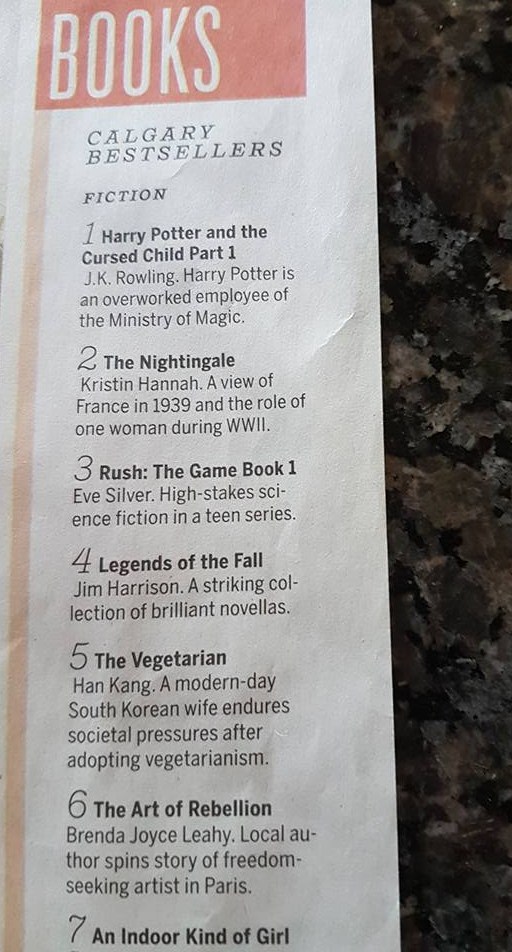 When a friend emailed me to say my book had hit Number 6 on the Bestselling Fiction list of our local newspaper, the Calgary Herald, I was a bit stunned. I ran out to buy a copy of the paper, and had to open it to the Books section before I believed her. Sure enough, there was my name in the newspaper in proximity to literary heavyweights like J.K. Rowling and Kristin Hannah (The Nightingale is on my bedside table).

After I got over the initial excitement of being on the list, I realized why it meant so much to me. The reason I write is mostly to express my creativity – telling stories by playing around with words, plot and characters. It’s fun. Or I probably wouldn’t do it. But when I take time to really dig deeper into why I pursued publication, I realized it wasn’t for fame (too fleeting and superficial) or for money (impossible to make money at this gig!). It was so that my stories would reach a greater audience than just family and friends.

Discovering my book on the bestselling list means I’ve reached a broader audience. That’s where the lasting satisfaction lies – knowing there are readers out there willing to be taken on Gabbi’s adventures – for better and for worse. Mostly for worse, because that’s what makes stories, after all.